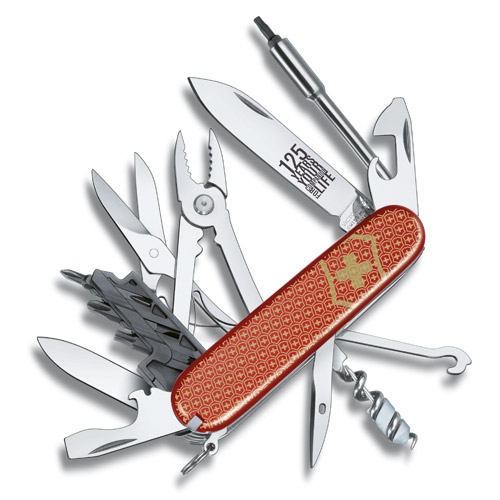 Series
From time to time Victorinox produces a special series of Swiss Army Knives.
Series can be generally available, or may be in collaboration with a specific reseller, and/or may only be sold through a specific reseller or distributor. Many series have limited geographical distribution, and may be sold in a single or a limited number of markets. The quantity produced for a series is always significantly less than for a standard model. Series are often targeted specifically at collectors, or are luxury priced items featuring special materials, scale and/or blade art.

The special attributes of a series and their limited production quantities make them more collectible, and they can often be hard to locate after the series has been sold out.

Series normally contain several models, that may be purchased together in a set, or individually.


Special Editions
There are several different types of Special Editions many of which are also Limited (in number). The size of their issue can vary from a handful to several thousand pieces. This list concentrates on the smaller issues, and those that might have some other unique or interesting properties of note.
The larger issues are often noted as variations on the detail page for a particular model.

Special Editions are usually a single knife only.

Sometimes knives produced are a 'Special Edition ' in a 'Series ' and 'Limited ' !! For instance the Damascus Series!!


This document from 2011 was published by Victorinox on the Yumpu site and details many of the collector's and special editions.

SAKWiki is maintained by volunteers and hosted by MultiTool.org, however it has monthly running costs.
If you are a user of this site, or maybe have taken information from this site to help with an eBay listing, and would like to contribute to help to keep it available -
Please donate here: