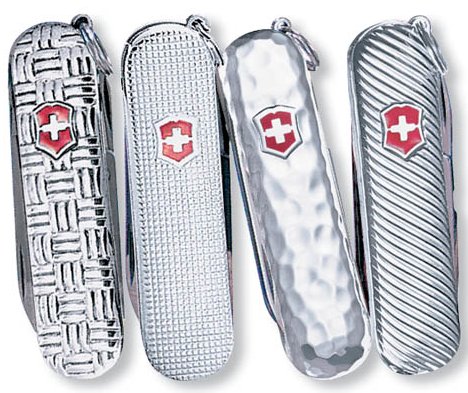 This is a series of the Classic SD knife featuring beautiful solid Sterling Silver scales with a number of different textured patterns in the metal work. They have a solid feel to them, weighing 40-50g depending on model.

Knives in this series

Victorinox reported the scales to be "handcrafted by one of the world's most prestigious silversmiths" without identifying them by name. Subsequent information appears to identify the company as Lunt Silversmiths for some of the models, and Reed & Barton for the Basket Weave pattern.

Note: Other/older Special Edition Sterling Silver models have been produced by Victorinox in partnership with other silversmiths.
It also seems that some silversmiths manufacture their own scales and attach them to the Classic frame and toolset.

The knives in this series are Classic SD models, but do not have the tweezers or toothpick tools.

This series came out in the mid-late 2000s (?tbc) and was not known to be a limited series, and is unlikely to still be being produced. However some models are still available from certain dealers (Aug 2017).