Victorinox is the manufacturer of the (trademarked) Original Swiss Army Knife

In 1884, Karl Elsener started his cutlery business in Ibach Switzerland. Soon after he approached the Swiss government about supplying the Swiss Army with knives manufactured in Switzerland, rather than importing them from Germany. In 1891 Elsener's Cutlery, as a member of an association Swiss Cutlers, started supplying knives for the Swiss Army.

In 1897 Karl Elsener brought out his legendary Officer's and Sports Knife, this was the start of the the ubiquitous Victorinox 91mm range. It is these models (now typically manufactured with red handles), not  the military models, that most people think of when envisioning a Swiss Army Knife!

In 1909, in part to distinguish his knives from competition, Elsener started putting the Swiss Cross on all his knives. It was also in this year that Elsener named his company Victoria after his mother, who had just passed away. Twelve years later, after stainless steel was invented, Elsener added the suffix inox, from the French word inoxydable (meaning stainless) to the name and renamed the company Victorinox. Stainless steel was a significant historical achievement and was also noted for many years on the tang-stamp of the main blade with the German word ROSTFREI.

After about one hundred years of making Swiss Army Knives, pocket and kitchen knives Victorinox diversified its product lines:

* Note: There are currently (2020) about thirty 91mm models in production 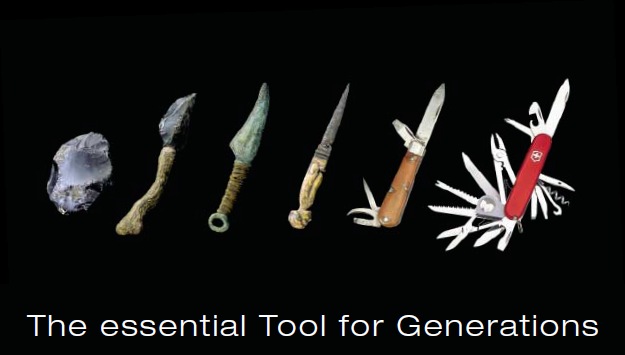