The Tools of the Swiss Army Knife 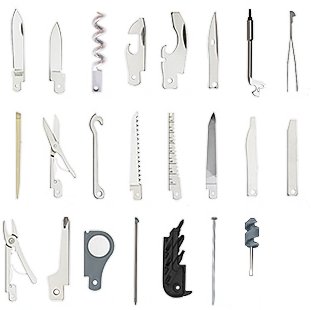 This page contains information about Victorinox and Wenger tools - for all  frame sizes.

For a Swiss Army Knife, the term Tools  refers to the various implements contained within the knife, that perform different functions or jobs. Victorinox and Wenger Swiss Army Knives have a lot of tools in common and each manufacturer also has their own unique tools.

The available (or once available) assortment of tools are listed in the sections below, by their primary name. They are grouped by the designation layer, or scale, based on where they are placed, then by manufacturer, then alphabetically. There is also a note if the tool has some unique property (eg backspring tool or uniqueness to a frame size). In some rare cases a tool might be found in a layer on some models, but in the scales of others. Specific information about each tool is in its own individual page, along with information related to any additional tools/functions within the same implement.

Note:
Since Victorinox and Wenger SAKS merged in 2014, Victorinox has taken on some of the Wenger tools in the Delémont models. See section below. The tools in this page are listed according to their original manufacturer.
If this page has been helpful, please consider making a small contribution to help keep SAKWiki going.

This section contains the tools that are common to both manufacturers, for the front and back  layers.

A tool is regarded as a common tool  if its function, as opposed to its design, is the same! These tools fall broadly into two categories: Tools that are very similar between the two manufacturers: such as the main blade, corkscrew, caplifter/screwdriver; and tools where each manufacturer has their own take, or design, of that particular tool: such as the scissors, or pliers. Both categories are listed in this section - The individual tool pages describe the differences between the designs.

This section lists the general purpose tools that are unique to Wenger.

Wenger made several very unique and interesting tools, aimed at specific sports or professions, that are listed in this section.
These tools were in specialist Swiss Army Knives such as the Swissrider series, or the Minathor, and several other specialist models.

In 2005 Victorinox took over Wenger. However they ran the two companies completely independently with separate product lines for several years.
In 2012 Victorinox announced that they would cease production of Wenger Swiss Army Knives and from 2014 only Victorinox branded knives were produced. However Victorinox decided to continue manufacturing of some of the former 65mm, 85mm and 130mm Wenger models under the Victorinox 'Delémont brand.
See the hyperlinks and Delémont section of this Wiki for more details.
Most of the tools in the Delémont range stayed the same as the Wenger originals, however the following Wenger tools were replaced by their Victorinox counterparts and the Wenger versions completely retired.