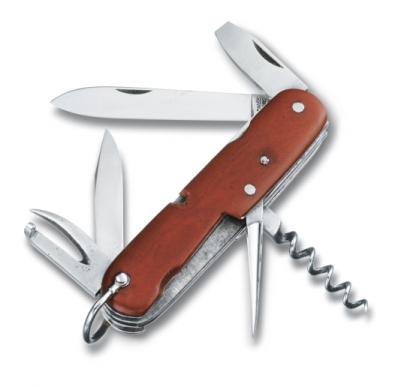 The original Victorinox Officer's Knife, is probably the most important knife in Victorinox's long history, and is the predecessor of what most people regard as a Swiss Army Knife.

This knife was originally registered with the patent office in 1897 as the 'Officer's and Sports Knife'. It was only preceded by the Original Soldier's Knife, but unlike the Soldier, it was never part of a military contract. Officers and gentlemen purchased the knife at cutlery stores.

The knife's popularity was critical at the time, as the company (which would later be known as Victorinox) was close to bankruptcy, and its success is credited with saving the company. In a sense it also bridged a society gap and entrenched multi-tool pocket knives in all levels of society. This would help to ensure the longevity of Victorinox, and also establish the great Swiss tradition of quality.

The small blade and famous corkscrew made their debut in the Officer's Knife, and this was the start of the the ubiquitous Victorinox 91mm range. 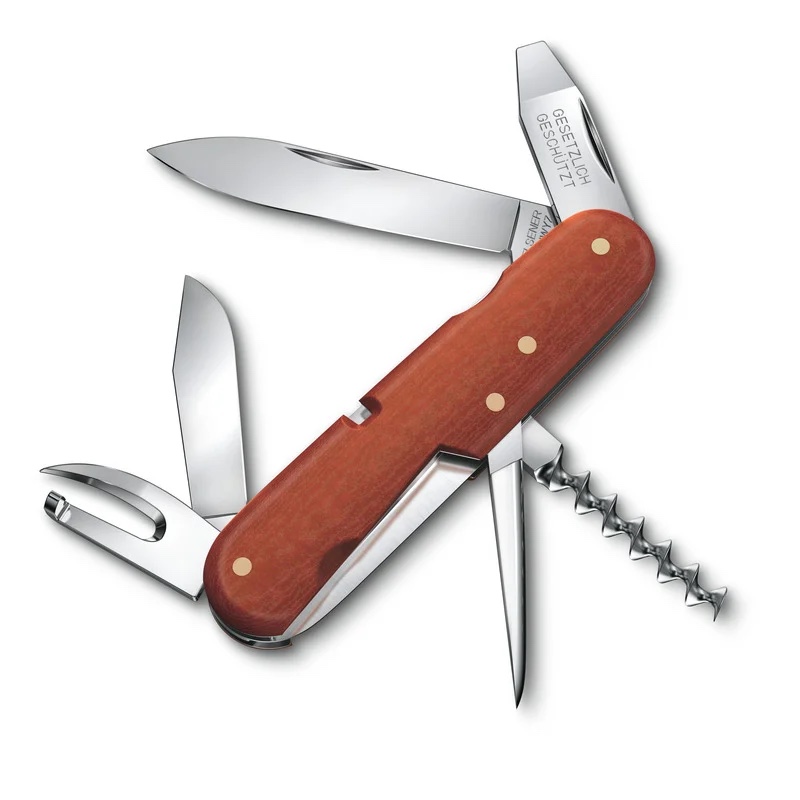 From Victorinox:
The Soldier's knife was very robust but relatively heavy. Karl Elsener therefore developed a lighter and more elegant knife for officers, which had even more functions. He called this new model of pocket knife, which had only two springs for six tools, the 'Officer's and Sports Knife'. It was legally registered on June 12, 1897. However, unlike the Soldier's knife, the Officer's Knife did not become part of the army's official equipment - which is why Victorinox writes the name 'Officer's Knife' in quotation marks.

This was the first of the 91mm Swiss Army Knives from Victorinox (Note: See Physical Dimensions below), and over the next 100+ years spawned a whole family of models, as Victorinox added more and more tools to their pocket knife. Other features of the tool also changed, for example the scales progressed from the original wooden handles, to fibre, then celluloid, and finally Cellidor (and occasionally Nylon); bails, keyrings, toothpicks and tweezers were added, and later electronic functions. The individual tools themselves also evolved and changed as Victorinox refined and improved their designs.

in 2022, to celebrate 125 years since it was first manufactured, Victorinox brought out an exact replica of Karl Elsener's original Offizier Messer (Officer’s Knife). It was a limited edition with 9999 pieces released worldwide (see image above).

The 1903 catalogue listed this model as being 9cm long. However, originally all these models were hand made, so there are likely to be small fluctuations from this precise length. By the 1940's the length is formally stated to be 90mm, as can be seen from this late-1940's catalogue page.
The length of this family changed to be 91mm in the early 1950's; along with many other major changes that occurred around that time: such as the change to aluminum liners, change of distance between the rivets, introduction of the new 1951 can-opener etc.

For active discussions and images regarding vintage Swiss Army Knives check out this thread at MultiTool.org