Swiss Army will forever be associated with the little red pocket knife. While red certainly is the most common color for a Swiss Army knife, it is not the only color they are available in. Victorinox and Wenger offer a rainbow of color choices for various models. Both companies offer their smallest knives in the most color options (Victorinox Classic and Signature knives, and the Wenger Esquire ), but larger models are often available in a few different color options as well. Victorinox also offers a number of their Alox models in various colors.

Despite being the most common color of SAK, Victorinox actually has the fewest shades of red available. Only Red and Ruby (Translucent Red) are found in this group.

The orange group includes four shades including some browns. The group is: Translucent Orange, Taupe, Electric Orange, and Rust. Upon further examination and research, some Translucent Brown knifes are definitely a faded Onyx rather than a separate color by itself. There is continuing debate regarding if all Trans. Brown are faded Onyx. (See the link in the first comment at the bottom of the page for pictures and discussion.)

Victorinox offers the following yellow shades: Yellow, Pale Yellow, Citrine (Translucent Yellow), and Lemon Yellow. The lemon yellow is a brighter, softer shade of yellow than the pale yellow which actually appears to have a hint of brown in it.

The blue group shows five colors, and at least a bit of a naming controversy. The shades are: Dark Blue (Sapphire), Blue, Peacock Blue, Sapphire (Translucent Blue), and Pale Blue. Note that the Dark Blue (which is nearly black) is probably retired. It was used before the translucent scales were introduced and was referred to, on at least some packages, as Sapphire. This is of course the name that Victorinox now uses for the translucent shade of blue.

Victorinox has three shades of the color purple. The purples are distinctly darker than the pink group discussed next. The shades are: Plum Purple, Pale Purple, and Translucent Purple. The Plum Purple is often referred to as simply Purple.

The pink group has four shades. Note that these are generally brighter and lighter than the purples. The shades are: Raspberry Sherbet, Pale Pink, Hot Pink, and Translucent Pink.

The monochrome groups covers all the shades from white to black. They are: White, Gray, Onyx (Translucent Black), and Black. Not pictured is a scale called SilverTech. This scale is a mix of translucent clear with some area filled in with silver. Because there is a pattern to this knife it isn't technically a solid color, though some may include it with this group.

It should be noted that beyond the solid colors listed above, there are a number of other options, including Camouflage, Edelweiss flower patterns and colors, Tie-Dye designs and colors, StayGlow scales that glow in the dark, and a number of Сarbon fibre, Natural Wood and Horn scales.

The Victorinox alox palette is far, far smaller than than the cellidor list. Alox shades can be found in at least the following colors: Red, Green, Black, Blue, Light Blue, brown, Silver (natural color), and copper. In 2007 a Limited Edition set of colors was introduced for the 58mm Classic SD Alox featuring a Lime-Green, Autumn-Orange, Hot-Pink, and a Blue. Since 2015 the Victorinox company annually releases a Limited Edition set of three coloured Alox knives: A Pioneer, Cadet and Classic. Each year's limited edition comes in a different colour. 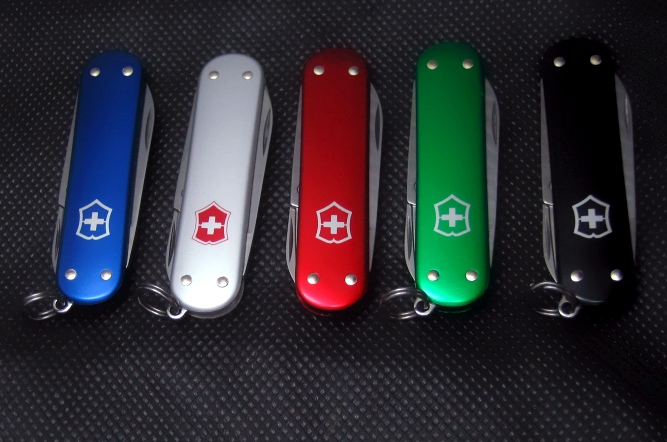 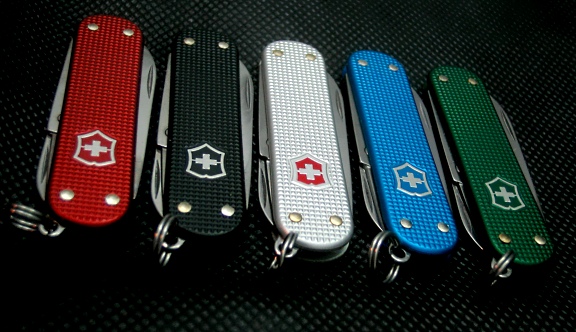 Some shades of red in the Alox 84mm range 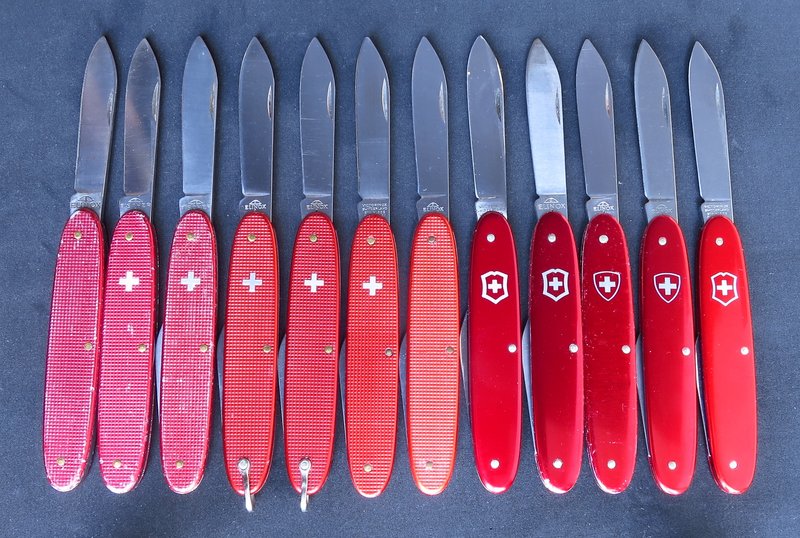 Other Colors are also available: 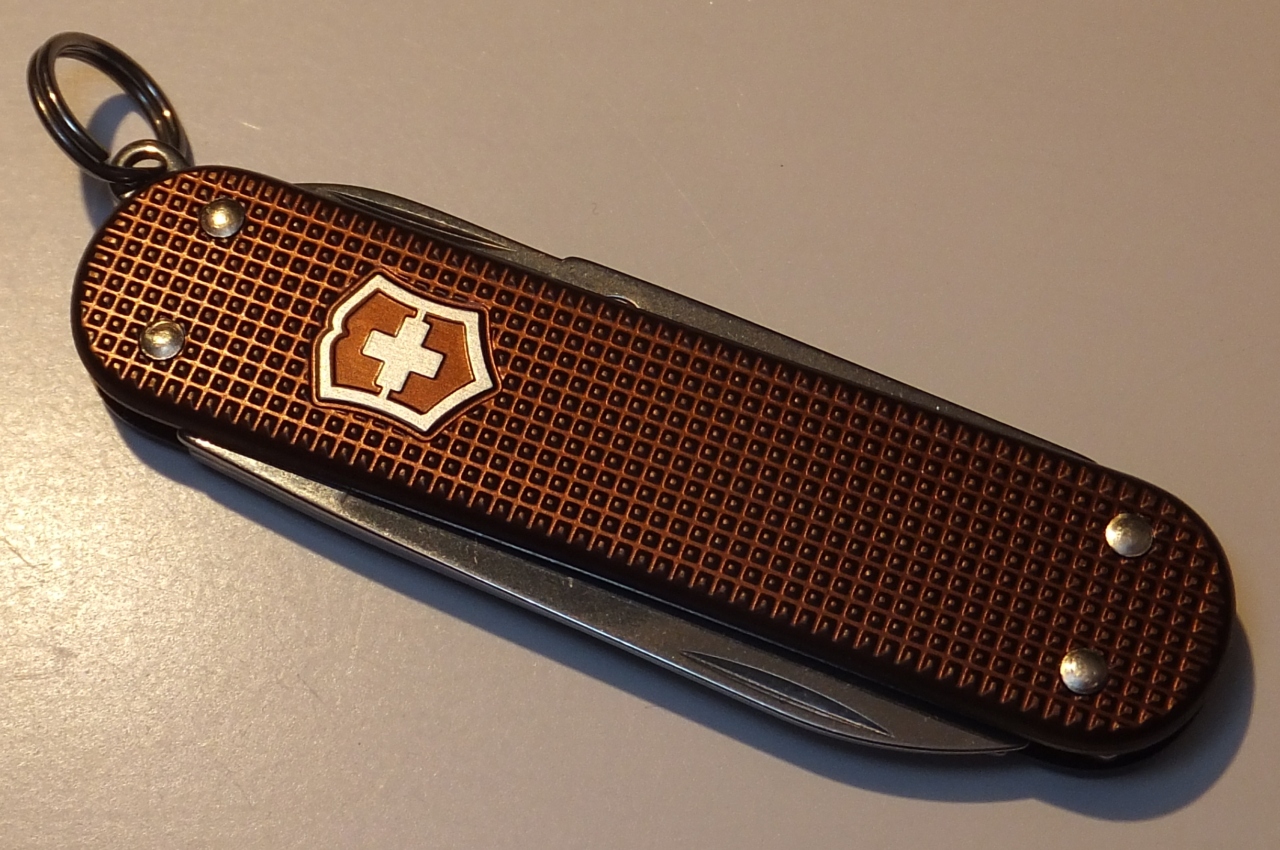 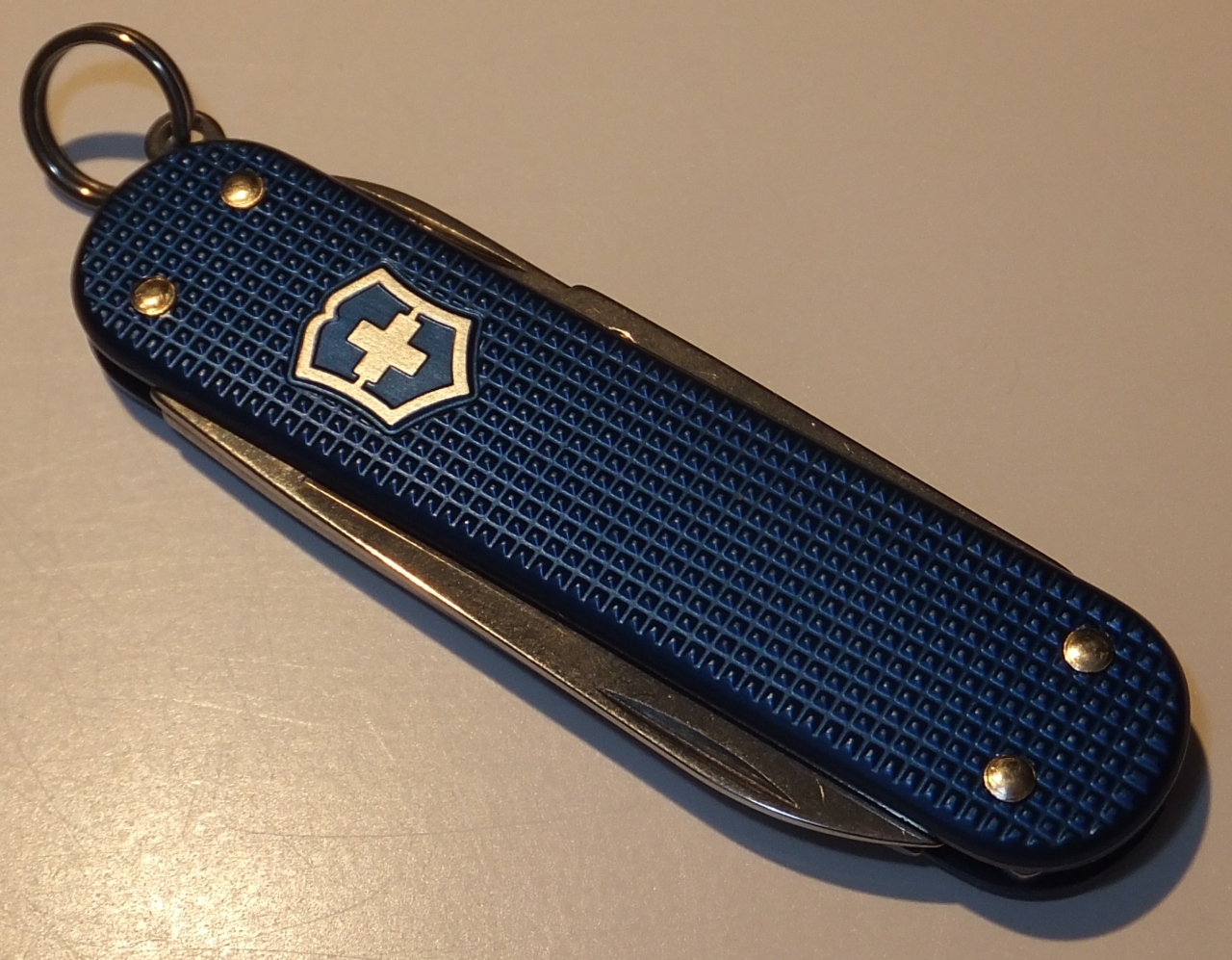 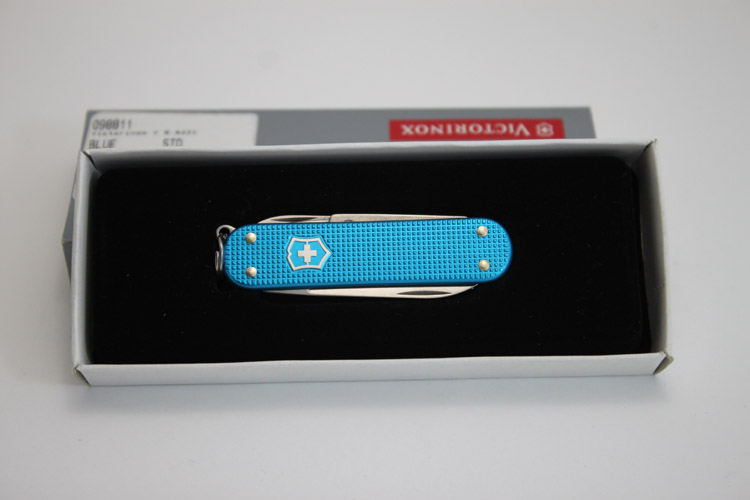 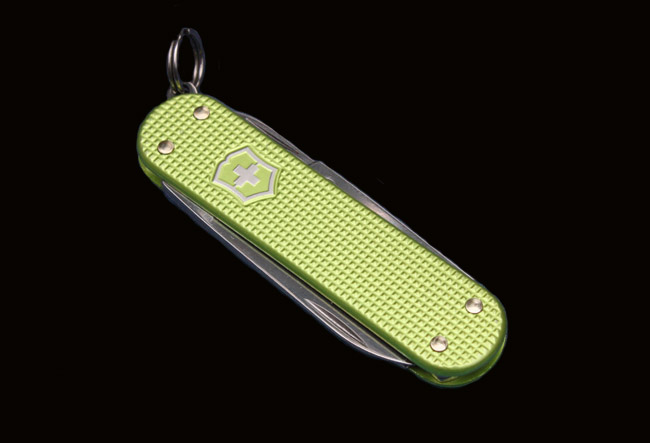 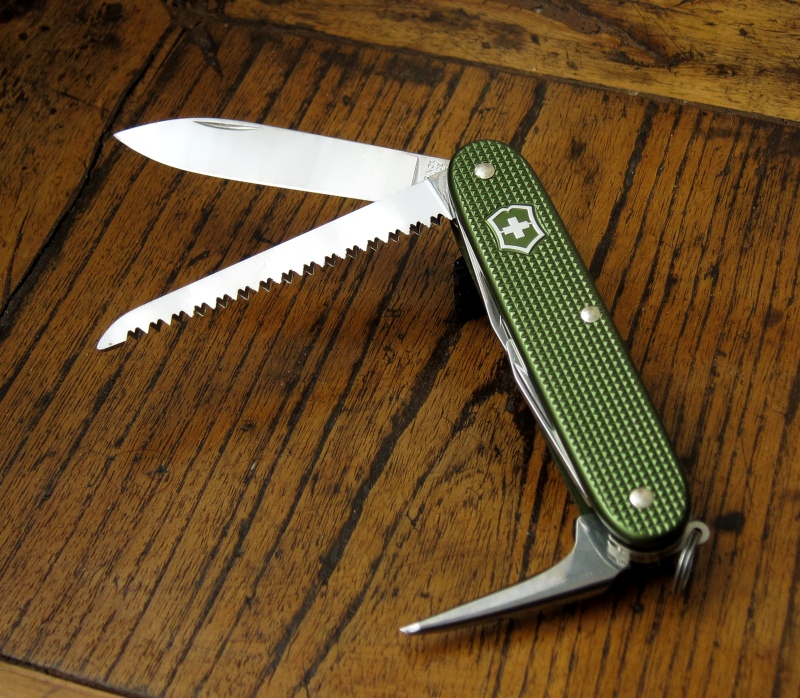 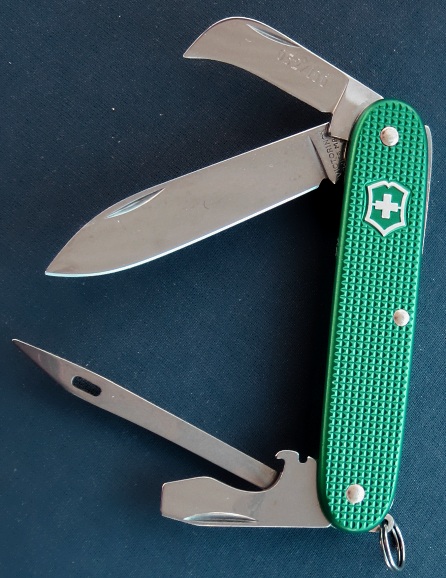 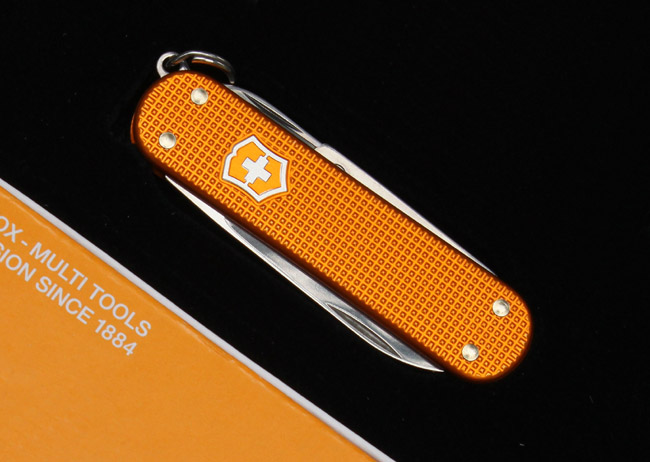 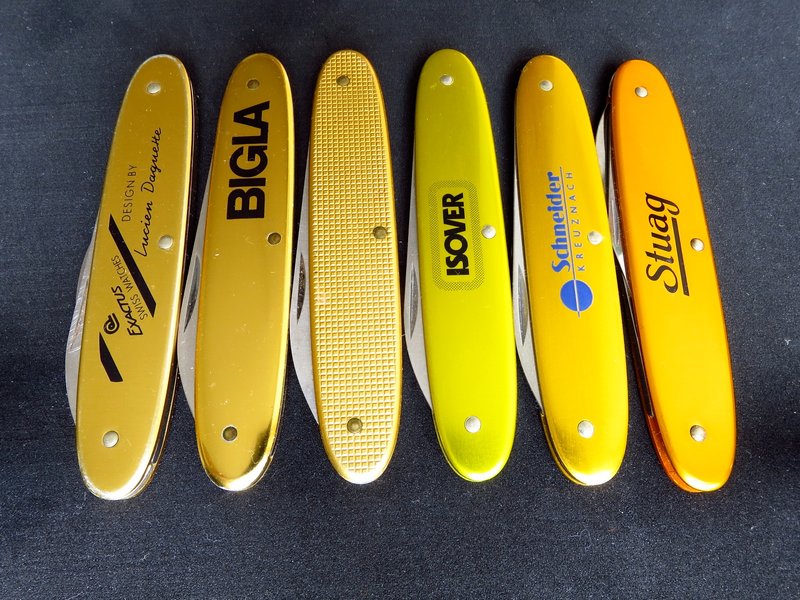 Wenger offered a rainbow of colour choices for various models, both in solid colours and translucent.

Basically, Wenger used red, black and blue colors for Eloxy (Alox) SAKs.
But some models also released in other colours. 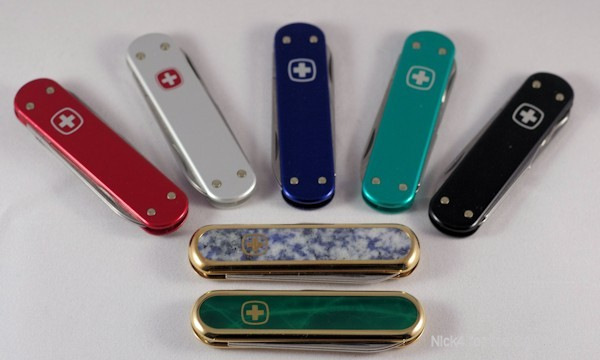 
Also there are a number of other Wenger models, including luxury Lithos (highly polished, inlaid stone scales), Macao (the scales with an inlaid Chinese hand lacquer finish) and Snife with fancy coloured scales.