Like many other Swiss Army Knife tools, the cap-lifter (sometimes known as the bottle-opener, or the large screwdriver), is designed to do more than just one function. This tool started out as a simple robust flat-head screwdriver on the original Soldier Knife, and later on the Officer's Knife. Over time the screwdriver evolved to include a cap-lifter/bottle-opener; later a wire-stripping notch was added, giving us the current cap-lifter/screwdriver tool. Along the way minor changes to the shape of the tool have also occurred.


58mm
Found on a handful of 58mm models and despite its small size, this tool combines the functions of a cap-lifter and a small screwdriver. Some models have a flat-headed screwdriver tip (eg the Rover), while others sport a Phillips head (eg the Rally), the tips are magnetic. In 1997, Victorinox added a small wire stripper notch between the cap-lifter and the screwdriver. The flat-tipped version is no longer available (since the early 2000s?).

84mm
The front of the tool is blunt and flat, making a screwdriver for medium sized flat-head screws. The cap-lifter/bottle-opener is cut into the body of the tool, the small hook near the base is used to catch the lip of the cap, as the tool is moved upward. Just behind the cap-lifter is a small wire-stripping notch. See instructions below. Prior to 2011 (estimated ) the 84mm tool did not have a 'stop' when the tool was opened at the 90º angle. The 91mm version had this feature much earlier.

91mm
The 91mm tool is very similar in design to the 84mm tool (a scaled up version!). However, the 91mm (and 93mm Alox) tools stop, (friction lock/catch) when opened at both 90° and 180° (fully opened). The catch/lock is a little stronger when fully extended. The extra catch enables the screwdriver to also be used in the 90° position, which can help torque or accessibility. It also helps keep the tool from unintentionally closing whilst being used. In 1999 a small 'locking-nub' was added to the tool which helps (but not prevents) the tool from closing when fully open. The nub engages with a small internal dimple in the backspring and can be seen when looking down on the tool from above when closed.

108mm
The 108mm cap-lifter is attached to the end of a wood saw and is part of what may be the first version of an openers combination tool.

111mm - Slide-lock version
The original cap-lifter for the slide-lock 111mm knives is very similar to the 91mm model, and appears quite small relative to the size of the knife.

111mm - Liner-lock version
Most 111mm Victorinox liner-lock models, and all larger liner-lock 111mm models, have a fully locking cap-lifter/screwdriver.
The screwdriver end is roughly 7mm in width, and the tool is considerably stronger than all other versions, being thicker at the base, as well as wider, so it can also be used as a small prying tool. When fully open (180°) the liner-lock must be released to close the screwdriver, it also features a catch (friction lock) at 90° that enables the tool to be used in this position. This feature is also present on the 84/91/93mm models.

The Cheese Master model has an unique cap-lifter embedded into the fondue fork.


85mm
The modern Wenger 85mm models feature a locking screwdriver on their cap-lifter using what is sometimes known as the 'Packlock' system. This design uses a unique spring mechanism on the tool: When pressure is applied along the length of the knife, the tool is pushed slightly into the knife body so that a catch on the tang of the tool latches into a notch in the spring, which means that the tool cannot fold in, until the pressure is released. This works as a very practical safety-lock, when having to use more force on the screwdriver, to loosen or tighten a screw. Unlike the Victorinox cap-lifters there is no stop/catch at 90° for using the tool in this position. The tool is about 27mm long from the edge of the frame

120mm / 130mm
The Wenger Ranger 120 and 130mm screwdrivers are identical, although they open from opposite ends of the knife. They also feature the same pressure 'Packlocking' system as the the 85mm version, but are much longer being about 40mm in length from the end of the frame. 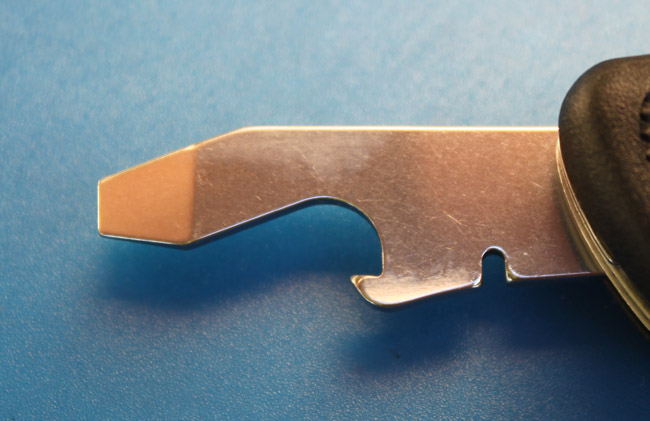 
The Wire Stripper is arguably the most misunderstood and misused tool on any Swiss Army Knife!
It works in conjunction with the main blade - which means this method works better on models with fewer layers.